With the recent passing of Queen Elizabeth, I found myself thinking a lot about the rift in the royal family. 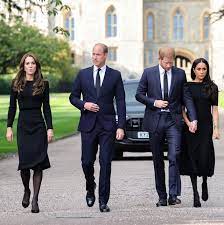 We don’t always get along with our siblings and in-laws but fortunately for most of us, our family drama isn’t played out on the world stage. The Royals couldn’t be on a bigger stage and it’s not going away, so time to rewrite the script.

I think it’s safe to assume that they are all guilty of something (or many things) and they could all make a case for why they should be angry and hold a grudge against each other.

But I’m pretty sure not one of them ever woke up in the morning thinking “what could I do to create chaos and havoc in our family.”

So, in spite of the hurt feelings and wrongdoings, how do they get to forgiveness?

At its essence, forgiveness is the willingness to let go of the hurt and give up suffering.

It’s a decision to no longer find value in anger or blame and it’s a letting go of the desire to judge another or our self because of something that happened in the past.

It’s a choice to feel love rather than to judge or condemn and, it’s often not easy…. and it doesn’t mean that we forget… but we do let go.

Forgiveness is something we do for our self so we no longer have to carry negativity.

It releases us from the past and allows us to heal and let go and be more at peace in the present moment.

When I am stuck in “I’ve been done wrong,” one of the practices that works well for me is to sit down and write a letter to the one I need to forgive. This is not a letter than will ever be sent, but a chance to write down and FULLY express how hurt and wronged I feel…. to write down what happened from my perspective.

Once I’ve written it all down… I add to the end of the letter, I forgive, you, I bless you and I set you free.”

Then, I write a second letter from them to me. Using my imagination, I channel them and have them tell ME the story of what happened from their perspective… which usually results in finding out that they never really meant to cause harm…. and then, I end that letter with I forgive, you, I bless you and I set you free.”

When it comes to love, I know that being able and willing to learn to forgive is essential to all healthy relationships. (And sometimes, it’s necessary to forgive and to also eliminate certain people from your life if they are toxic or detrimental to your core happiness.)

With the loss of their beloved matriarch, Queen Elizabeth, the Royals need each other more than ever.

Meghan and Harry’s kids deserve to have the love of their Grandparents (King Charles II and Queen Consort Camilla), their Aunt and Uncle, Princess Kate and Prince William, and their first cousins. I would urge all of them to dig deep and forgive the past and move on.

Wouldn’t it be great if they could all go to family therapy together, hash it out, and then kiss and make up?

Now, that would be a reality show I would want to watch.