Prolific artist/musician Sharron Katz has an inspiring soulmate manifestation story that I just had to share with you.

Now, at age 61, she is happily with her beloved, Mike, 66, and together they are sharing a juicy, creative, open, honest, musical and artistic life together.

But it almost didn’t happen. 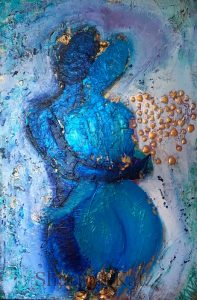 After a 15-year marriage and a super bad divorce, Sharron had big doubts if she would ever find real love.

Thank God she trusted her intuition, and she was willing to do the deep work on herself and of course, followed The Soulmate Secret manifestation steps.

Intuition #1: She moved to a smaller town once her daughter left for college.

Intuition #2: In addition to creating a soulmate wish list, she had a vision to create a painting of her and her man (you are looking at it now!) to assist magnetizing him in.

Intuition #3: Once moved into her new town, she boldly and bravely found a Facebook group of local musicians and invited these like-minded strangers to her home for a party. Mr. Right was among the guests that night and sparks flew.

One of Sharron’s big commitments to herself was to work on love from the inside out and to be fully open and honest about what she most wanted and needed in a relationship. And, she wasn’t going to “settle” for anything less than that level of honesty and transparency.

The relationship was on.

Then it was off (several times). 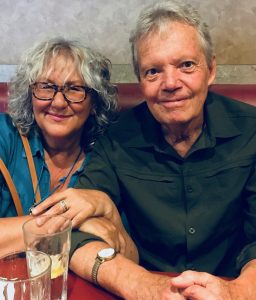 Then it was on again and eventually, it became clear that Sharron and Mike were meant to be.

Sharron says, “He thinks I have a beautiful body, even though I’m the most voluptuous I’ve ever been. He loves my art…but more than this…he loves my heart as he treats it so tenderly.

Mike says, “I feel like I just want to wrap myself around you and protect you from all the outside world and keep you safe.”

Sharron and Mike are just more proof that finding Big Love is possible for everyone, regardless of age, weight, or failed relationships from the past. And….when you have clarity about what your soul is most calling for, YOU get your wants and your needs met with the right partner.

The last few days I have been on fire with Spring cleaning. Suddenly, I am filled with energy and motivation to clear out clutter, clean up old messes, wipe down the baseboards, throw out and give away things that aren’t needed… and it feels great.

As part of your Spring Cleaning to enhance your love life, my friend and Feng Shui expert Shawne Mitchell suggests enlivening the Marriage and Relationship section of your home.

To figure out where this is, stand in your front door (facing into your home) and locate the far right corner of the house (or of your bedroom) and this is it!

Not only does this section represent all love relationships, on a spiritual level it also represents your relationship to yourself.
To enliven this space, add artwork that depicts love and romance, or add pairs of things such as two lovebirds, or swans or any animals that mate, like dolphins.

Include fresh flowers, candles, and crystals (you can hang them from the ceiling on red or pink ribbons.) 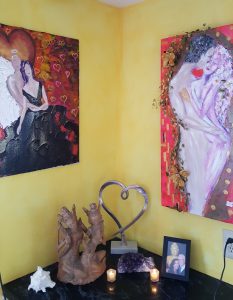 For the romance corner of my office (see photo) I’ve also included my favorite photo of Brian and me.

While I was sorting and cleaning through a variety of items, I began to think about emotional items I could be clearing away as well.

Ask yourself questions such as:

What psychological clutter or negative emotions do I need to let go of?

Who do I need to forgive?

Who do I need to reach out to?

Clearing and cleaning the clutter of our hearts, minds, and home is a profound and beautiful way to welcome in this new season of hope and rebirth.