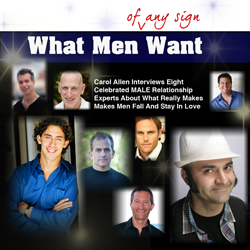 I’m constantly amazed at how little men and women understand each other… and at how much needless pain and suffering that causes.

Our differences are downright comical – as though God is playing a cosmic joke on all of us.

Here’s what I mean…

Did you know that women communicate with an average of over 20,000 words and sounds a day, but men use only about 7,000? (Yup – he really is out of words at the end of the day…)

And did you know that if you look at the results of research studies from many branches of knowledge (psychology, sociology, anthropology, neuroscience), they all find that women’s core primary need is connection, while men’s is competition?

Do you see a little, er, problem with each of these examples?

Sadly, they leave many of us baffled. And vowing that we’d rather “call the whole thing off.”

Which is why it’s so helpful to understand what’s really going on, and that it’s not personal. But once we women get past the theories, philosophies and research results, it’s so helpful to know just what to do at critical moments when you’re dealing with a real, live man.

How should you behave when you first meet a guy?

Is it okay to approach, or should you wait to see if he’s interested?

What do you do on first dates? Second dates? And when is it okay to sleep with him?

And once you’re seeing him regularly, how can you be sure he’ll stick around if you want him to?

For answers to such questions, I like to go “straight to the horse’s mouth.”

My good friend, Carol Allen, (Vedic astrologer and relationship coach), agrees. Her favorite thing is learning about men from men, too. But not just any men. Carol likes finding out what men want from men who’ve made it their life’s mission to understand other men.

So she sat down with eight of the world’s leading male relationship experts and interviewed them at length about what men are thinking, and what attracts them and wows them in a woman (and what makes them want to commit!), for a program called, “What Men Want.”

What she learned from these amazing men (all of whom are authors, and many of whom have worked with thousands – even hundreds of thousands – of men!) forever changed her understanding of and appreciation for men.

Here is just a small sampling of the golden nuggets that come from these incredible men:

Carol is one of my favorite relationship experts, and the men she’s gathered are among my favorite men! (Seriously, these guys are all great and they really know their stuff – Evan Marc Katz, Christian Carter, David Wygant, Jonathon Aslay, Alex Allman, Larry Michel, Adam Gilad, Dr. Ali Binazir… there’s even a bonus interview with Mat Boggs.)

Don’t ever be needlessly baffled or hurt by a man again. Learn the secrets only men can tell you, and be amazed at how much better life can be. Learn more or order this special, love-life saving program here.