I recently attended a creativity workshop taught by famed artist and animator, Dave Zoboski (link to www.TheAlchemyofCreativity.com ). He spent decades working as a Senior Animator at Disney, Sony and Warner Brothers.

We all were given colored pencils and a sketchpad while Dave’s model posed for us.  Most of us didn’t have any real artistic ability in this field, but we were encouraged to have fun and go for it.

After several minutes of sketching, he told us to stop and to put our pad on our chair and to move three seats to our left and then pick up the pad on that chair and begin sketching on

someone else drawing.   The assignment was to see how we could improve upon what they had already begun.

Dave explained that in the animation field, the culture is such that you never criticize another artists’ work, but rather you become a “plusser” for them …someone who adds to and improves the work they have done so far.

I fell in love with this idea and began thinking about how wonderful it would be if we all declared ourselves “plussers” in love, and gave up being “judgy” thus committing ourselves to contributing to those around us in ways that are positive,  uplifting, and kind.

For whom will you be a love plusser?

P.S. If manifesting a soulmate is your priority, then I invite you for the only two LIVE in person events I am doing this year.

Saturday, April 27th  and I will be teaching at the breathtakingly beautiful

Esalen the weekend of May 8-10. Details for both here: https://www.arielleford.com/events/

Prolific artist/musician Sharron Katz has an inspiring soulmate manifestation story that I just had to share with you.

Now, at age 61, she is happily with her beloved, Mike, 66, and together they are sharing a juicy, creative, open, honest, musical and artistic life together.

But it almost didn’t happen.

After a 15-year marriage and a super bad divorce, Sharron had big doubts if she would ever find real love.

Thank God she trusted her intuition, and she was willing to do the deep work on herself and of course, followed The Soulmate Secret manifestation steps.

Intuition #1: She moved to a smaller town once her daughter left for college.

Intuition #2: In addition to creating a soulmate wish list, she had a vision to create a painting of her and her man (you are looking at it now!) to assist magnetizing him in.

Intuition #3: Once moved into her new town, she boldly and bravely found a Facebook group of local musicians and invited these like-minded strangers to her home for a party. Mr. Right was among the guests that night and sparks flew.

One of Sharron’s big commitments to herself was to work on love from the inside out and to be fully open and honest about what she most wanted and needed in a relationship. And, she wasn’t going to “settle” for anything less than that level of honesty and transparency.

The relationship was on.

Then it was off (several times).

Then it was on again and eventually, it became clear that Sharron and Mike were meant to be.

Sharron says, “He thinks I have a beautiful body, even though I’m the most voluptuous I’ve ever been. He loves my art…but more than this…he loves my heart as he treats it so tenderly.

Mike says, “I feel like I just want to wrap myself around you and protect you from all the outside world and keep you safe.”

Sharron and Mike are just more proof that finding Big Love is possible for everyone, regardless of age, weight, or failed relationships from the past. And….when you have clarity about what your soul is most calling for, YOU get your wants and your needs met with the right partner. 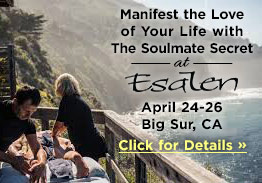