This may be the first and only time I write a review of a TV show, but I couldn’t resist musing on this.

As you probably know, the revival of Sex and the City (sans Samantha) just launched. 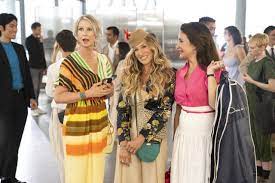 I was excited to get caught up with the girls.

Of course, I expected they would look older (it’s been 20+ years since we all met) and of course I expected trendy fashion and witty banter, but I wasn’t prepared for what was served up.

The wardrobe didn’t disappoint but the women wearing the clothes made me cringe. Big time.

For starters, Carrie now has a new gig on a podcast that is attempting to be the coolest venue ever for the super woke and LGBTQ+ world.

The main host tells Carrie that she needs to open up and really participate and gives her instructions “to step up her pussy.”

Miranda has left her law career to go back to college and get a new degree as an activist/advocate for the downtrodden.

Her first moment in class has her with both feet in her mouth which sends her shrieking a bunch of “I am not a racist” stuff to her Black professor.

What happened to cool, calm, intelligent Miranda and when did she become an inarticulate people pleaser?

The biggest change in Charlotte is her lips.

She has had an unfortunate amount of bad plastic surgery. Social media has been very unkind to Charlotte even though it makes sense that a very wealthy Upper Westside gal would do what she did.

Of all the characters she seems most like herself, only seriously more overly emotional.

Spoiler Alert:
IF YOU HAVEN’T WATCHED AND YOU PLAN TO, STOP READING NOW!

One of the better moments of the show was seeing Carrie and Big, happily married, finally appearing to be in a good place with each other. 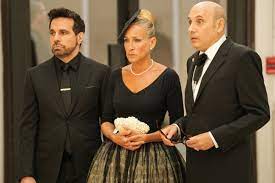 Big even gets super romantic and sings to her the classic Todd Rundgren song, “Hello It’s Me.”

It’s the happiest moment in the show.

But then, BOOM, by the end of episode one, AND JUST LIKE THAT, Big dies of a heart attack after a workout on his Pelaton.

Episode two is mostly Big’s funeral which is a beautifully executed. It’s sleek and elegant. Halston would have approved. Carrie wore a Fascinator that Meghan Markle would love.

Do we watch Carrie’s grieving process and her torn feelings about when it’s appropriate to start dating again?

And, if she starts dating will it be on Match or Bumble?

Part of me is so curious to see if the show will improve.

Will Miranda stop trying to be utterly, politically correct?

I’m not sure I’m ready to watch Carrie suffer as a beautifully dressed widow.

And then again, my curiosity will likely win out. At least for a few more episodes.